Sports have probably never been a more important part of my life. It’s my sole entertainment in these pandemic times of isolation. I’ve gone through most of the movies and documentaries I’ve wanted to watch, waiting for live sports to finally return. Now, there’s almost too much to keep track of every day. My love of sports dates back to childhood and following my local high school team – The Elkhart Blue Blazers. A once dominant team in most every sport was eventually split into two high schools. Throughout the years, there was never a greater nemesis than the Penn Kingsmen in nearby Mishawaka, Indiana. Once I moved away from town, it seemed like every time I checked the scores it was another loss to Penn, particularly in football. 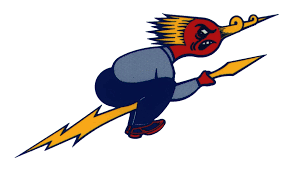 “Once A Blazer – Always a Blazer” is the motto of my generation, disturbed by the recent consolidation of the two Elkhart high schools into one again. They should have never been separated in the first place, but it did start another rivalry between the Memorial Chargers and the Elkhart Blue Blazers. Unfortunately, neither team was very competitive on the state level like Penn. The main problem with unifying the two programs became selecting a name. As a result, the Blazers or Chargers no longer exist, but the new Lions have become a football force. For the first time in 35 years, the final score of Friday night’s football match-up was Elkhart 20 Penn 19, and the team that I will always know as the Blazers are undefeated.

As I write this morning, I’m watching the final day of the Tour de France, reminiscent of our trips to Paris. It too was delayed several months as organizers made adjustments to deal with  Coronavirus concerns. Slovenian Tadej Pogacar won it in his rookie debut. Cycling, golf, auto racing, football, and baseball are all now competing with each other for television viewership, with little in the way of live fan support. Plus, last night the Portland Timbers pounded the San Jose Earthquake 6-1 for a MLS victory, after a draw the other night in the same stadium.

So far, 2020 has been a good year for my teams. The Chicago White Sox just claimed their first playoff berth in twelve years. The Cubs will also soon clinch, putting both Chicago teams in the same post-season battle for only the third time since 1906. The White Sox, known that year as the “hitless wonders” upset the powerhouse Cubs in the World Series. Could it happen again in this year of strange surprises? Last Sunday, for example, the Bears, Cubs, and White Sox were all victorious. I bought a new pair of Sox Socks to celebrate their success. My Bears and Cubs socks don’t have holes in them yet.

The Cubs had a five-game winning streak going into last night’s game against the Twins. Sadly, the streak ended badly and the Cubbies allowed the Twins to clinch the fifth spot in this year’s post-season. The Cubs magic number is now four with three games remaining against the White Sox. They could each knock the other out of the top spot in their respective Division races. A week from now the seeds will all be finalized. Could the Sox and Cubs collide for all the marbles again after 114 years?

Chicago baseball has witnessed two no-hitters this year, the only ones in the majors. I bought Topps cards to commemorate these two remarkable achievements from Luis Giolito of the White Sox and Alec Mills of the Cubs. At no other time in history have both Windy City teams had this happen in the same season. It’s just the beginning of what could happen in Sweet Home Chicago this year. Unfortunately, a Cubs-Sox World Series would be held in Arlington, Texas,

The other important development this past week in sports was the BIG 10 conference rethinking the earlier decision to delay Fall football. After much controversy, schedules starting October 24th were finally announced. I.U. will open at Penn State and conclude with Purdue eight weeks later. The ninth game for the Cream & Crimson will either be the BIG Championship or a bonus conference match-up with potential Bowl implications. Let’s hope it’s not the Toilet Bowl – they could easily go 0-9. Basketball will begin November 25th when the Hoosiers were originally planning to play in Maui. It will be a week later in Asheville, as a further indication of the strange twists in sports this year. Will 2020 also be good to both Hoosier teams, despite the delays?

The Lakers are in the driver’s seat for this year’s NBA Championship, with an opening round final four victory over Denver. The Tampa Bay Lightening lost their Stanley Cup Finals opener against the Dallas Stars. I’ll need to follow them as a future Florida resident. The Rays are comfortably in the MLB play-off field, while the Bucs and Tom Brady did not get off to a great start last Sunday. I’ve now lived in enough states to always have a team in contention, but Chicago will forever remain my favorite.

Theme by Anders Noren — Up ↑